Part 6 - Controlling the player with the keyboard

By Alvin Ourrad and Richard Davey on 25th November 2016   @photonstorm

Colliding is all good and well, but we really need the player to move. You would probably think of heading to the documentation and searching about how to add an event listener, but that is not necessary here. Phaser has a built-in Keyboard manager and one of the benefits of using that is this handy little function:

This populates the cursors object with four properties: up, down, left, right, that are all instances of Phaser.Key objects. Then all we need to do is poll these in our update loop:

Although we've added a lot of code it should all be pretty readable. The first thing we do is reset the horizontal velocity on the sprite. Then we check to see if the left cursor key is held down. If it is we apply a negative horizontal velocity and start the 'left' running animation. If they are holding down 'right' instead we literally do the opposite. By clearing the velocity and setting it in this manner, every frame, it creates a 'stop-start' style of movement.

The player sprite will move only when a key is held down and stop immediately they are not. Phaser also allows you to create more complex motions, with momentum and acceleration, but this gives us the effect we need for this game. The final part of the key check sets the frame to 4 if no key is held down. Frame 4 in the sprite sheet is the one of the player looking at you, idle.

The final part of the code adds the ability to jump. The up cursor is our jump key and we test if that is down. However we also test if the player is touching the floor, otherwise they could jump while in mid-air. We check the variable hitPlatform just to make sure the player did actually collide with the floor, and not anything else.

If both of these conditions are met we apply a vertical velocity of 350 px/sec sq. The player will fall to the ground automatically because of the gravity value we applied to it. With the controls in place we now have a game world we can explore. Load up part7.html and have a play. Try tweaking values like the 350 for the jump to lower and higher values to see the effect it will have. 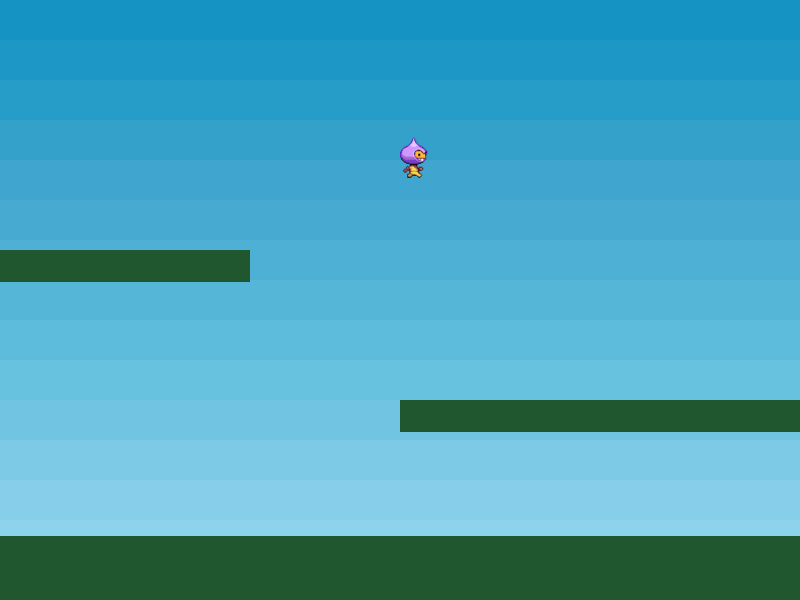