Converting a Flash game to HTML5

A comprehensive tutorial on using Phaser Editor to help convert a Flash game to Phaser 3. 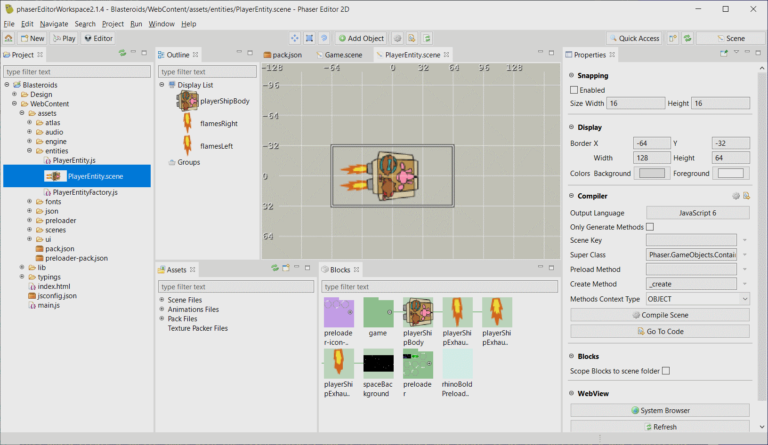 Over on the Gameplay Coder blog, Cartrell Hampton has written a great tutorial on the process of converting a Flash game to Phaser, using the Phaser Editor as the base:

"As you’re probably aware by now, Adobe is discontinuing the Flash web browser plug-in by end of 2020. If you have Flash games, they will no longer work afterwards, as browsers, such as Google Chrome, will completely block Flash content.

If your game is to be preserved, you’ll have to re-build it for another platform, and if it’s to stay as a web-based game, then HTML5 (Canvas/WebGL) is likely your best bet.

In the last article, I was challenging myself to convert a previous Flash game called Blasteroids that I made for a previous client to HTML5.

Digging up the original source code, I jumped in. But first thing’s first. I’ve also been learning Phaser 3, and the latest version of Phaser Editor, (awesome tool by the way; I highly recommend it for Phaser game development) which supports Phaser 3.

Most of the time spent on the project so far has been figuring out how to convert resources over. Sure, I could just “make” a new Blasteroids game, but the challenge is for the Phaser version to maintain the play and feel as closely as possible to the original Flash game.

So I started with both editors, Phaser Editor, and Flash CS. I’m examining how the scene is set up in Flash CS and replicating it as closely as possible. Images and locations are super-easy to move over. However, the way that the code is assigned to the images and their underlying “game objects” will change, simply due to how Phaser interacts with the scene, and how Phaser Editor sets up images for you on the scene."