This is the biggest update to Phaser 3 yet, with hundreds of updates across the whole API. There are fixes, new features and updates galore thanks to a fantastic contributions from the community.

Posted on 12th Apr 2018. Follow @phaser_ and get the Phaser World newsletter. 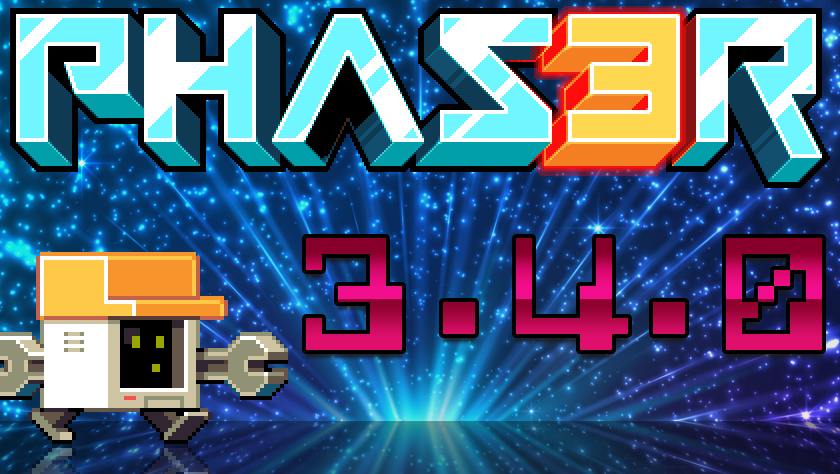 I'm pleased to announce that we've just released Phaser 3.4. Hot on the heels of the considerable 3.3 release, this one brings a truly huge amount of updates to the party. It represents the last 20 days worth of work from the core team and wider community. You've really been getting involved, which is awesome! Helping fill-in documentation, fix bugs and add cool new features. The amount of people involved in this release is the most impressive aspect of it and truly quite humbling.

The core team has been hard at work too. This release includes beta support for Game Object Containers, a complete overhaul of the Animation API, updates to Scene handling and a lot more. We made some extensive changes to the Animation system, so if you use animations in your game please do consult the Change Log to see what has been modified for the better.

We've also published Phaser 3.4 versions of the TypeScript Definitions. Again, thanks to the community for helping iron out some of the issues with the defs, they're getting every more accurate and powerful with each version. Once we're happy the generation process is faultless we'll merge them into the core repo.

Now that 3.4 is out we will carry on finishing Containers and jumping on reported issues on GitHub, so there will be no let-up in the release velocity (although the scale of those releases should be a lot smaller.) But I personally am going to spend the next 6 weeks focusing on tidying up the examples and preparing more documentation. We've also got some exciting developments in the works which we can hopefully share soon.

Until then, grab the latest build from GitHub, npm or CDN and as usual see the full Change Log for details.