Welcome to another Dev Log. First of all in Phaser CE land we've got the 2.8.7 release. There were a few issues with TypeScript defs and Signals in 2.8.6 which the community quickly resolved, hence the new version. You can find the full details in the ChangeLog like usual.

Things are changing fast around here. We're adding new features, tweaking the API and fixing bugs literally every day now. So rather than wait for a 'large' release I'm going to push new Beta versions out every week. To that end, Phaser 3 Beta 2 is now available.

Yes, there are still several large sections missing from the API, because we're not at that point yet in the schedule, but I still feel these are valid beta versions in that all the features that are present are worth testing in earnest, as they won't be going through any drastic revisions. We're still making lots of internal changes but the public API hasn't altered that much in a while now.

I spent the start of the week testing every documentation generation I could get my hands on. JSDoc3, documentation.js, Sphinx, you name it, I tried it. And none of them worked as required. This is due to a combination of me needing some specific output option support and also due to the way we have internally structured v3. For example, I will often break large classes down so that the methods sit inside their own files in an 'inc' folder. This is to primarily to keep things tidy and also allows for us to swap out methods easily without changing whole classes. It also means that if you wanted to tweak a class you could literally make your changes to a single file and only that method is impacted, rather than the entire thing.

However, none of the doc generators out there like this one bit. I was determined not to have to write my own either though, so instead, I've gone for the middle ground. I'm now using a couple of npm packages: extract-comments, to suck all the jsdocs out of the v3 source, and doctrine, to parse the docblocks and get an AST back with all of the tags in. Doctrine nicely handles everything I've thrown at it so far and is actually the parser used internally by documentation.js. What this means is that the jsdoc scraping, extracting and tree building is now working nicely. Leaving me to have to write the generator that will take this data and spit it out into the formats we require (which are HTML, markdown, and JSON).

Because I'm going to write this generator by hand it means I can use my own custom jsdoc tags for things like extended tutorials and most importantly TypeScript defs. In lots of cases we can infer the types from the tags, but not all, and this will allow me to mark-up the more troublesome objects so we can export TS defs directly and not have to manually maintain them. So there's still a bit of work to be done here in terms of creating the output - but at least I didn't try to reinvent the wheel with the most complex part, namely the extraction and parsing, and am just using tried and tested tools for that.

From the start, we've been careful to ensure that all of the rendering functions are split out into their own files. Game Objects, for example, have a file that handles their Canvas rendering and one for WebGL. The thought being that this would allow for specific builds of v3 with just one renderer inside and literally none of the un-needed functions would be present.

I've now added this feature to v3. Taking advantage of webpack definitions we're able to signal to webpack that a block of code should only be included if a specific flag, or combination of flags, are set. This means you can now do a 'canvas only' build of v3 and literally none of the WebGL functions are present, at any level. This saves masses of space in the build file as you can appreciate. For example in a Canvas only build we don't include Game Objects such as the Effect Layer, Render Pass or Light Layer because they are WebGL only.

We can also use build flags to gate-off features that are in testing and shouldn't make it into production yet. Another change is that the entry point file now controls almost everything that is added to the library. If you don't require any of the extra math functions then they can now be easily excluded allowing for real 'minimum' build sizes. The same goes for Game Objects too. There's no fear of accidentally breaking a class by excluding something it may need either because classes all require the specific functions they need directly and never assume them to be available within the Phaser namespace. It's a great feeling to have this in place and working and will truly allow you create whatever package you want.

Another nice side-effect is that you can now dynamically load Game Objects at run-time too. This is great because I think it'll open up a whole new "market" alongside plugin authors. Now you can download and try out brand new Game Objects without ever having to build Phaser for yourself or change the source in any way.

I also spent a day finishing off the Math functions which included adding in all of the Vector classes. Phaser 2 didn't have any support for Vector data types, instead, we used and abused the poor Point class in ways a Point really never should have been. In V3 we now have native Vector2, Vector3, Vector4, Matrix3, Matrix4 and Quaternion classes. These closely follow the best practices laid down in the gl-matrix library, such as unrolled loops and a careful consideration of performance. It feels great to have them in place and we can make good use of them across the revised Arcade Physics API, the Particle system and elsewhere.

Looking towards a 3D future

While Phaser 3 will be entirely 2D in nature I do not wish to cut myself off from going 3D in the future. When we added depth sorting support to the renderer we used the 'z' property, so you change a Sprites z property and it would shift position in the display list. However, x, y, z and w are the 4 common positioning components required for 3D space. So we made the decision to rename 'z' to 'depth'. You can now set the depth of a Game Object by changing its depth property or calling setDepth directly. We have also added in the z and w properties, reserved for future use in a 3D environment and even useful now for things like embedding particle position data.

Felipe has been working on the new Particle Emitter for v3. It's still early days but the core Game Object is in Beta 2 already and there's an example to play with too. It has basic particle rendering, particle movement and a life cycle and pooling. This week we'll add interpolation effects so you can tint, alpha, rotate and scale the particles, allowing for nice effects like fire, bubbles, stars, etc very easily. For now, have a play with the demo below. Sorry that it's the only eye candy this issue, but I have something neat lined-up for issue 98 :) 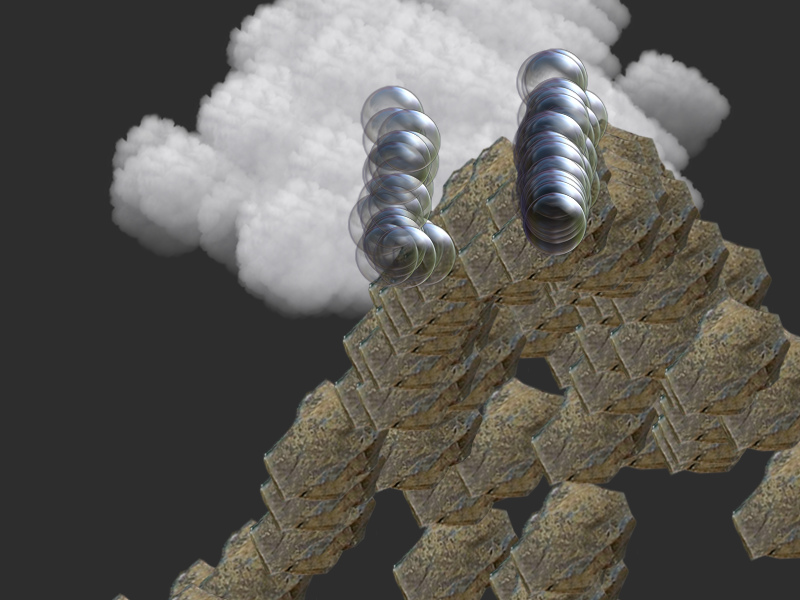