A deep dive into how the new Phaser 3 Scale Manager is being built, with examples, code and game configs.

Welcome to another new Dev Log! This week has been a constant stream of progress, which is always a good thing. There have been several days where I've gotten so into the coding zone that I didn't even realize many hours had passed. So, what has been taking all my attention? Let's dive in ...

I've been working almost exclusively on the new Scale Manager and am really happy with where things now stand. I have rewritten it from scratch, compared to the Scale Manager found in Phaser 2. My original plan was to port it over to V3 and use it 'as is', just tidying things up a bit as I went. But, it soon became apparent that the way it was built wasn't really relevant for the web as we know it today. It also had a lot of weird features that, honestly, even I struggled to understand what they did. In my mind, starting from a fresh slate made more sense.

So, I dumped all the old V2 code and APIs, and re-thought how a more modern scaling system should operate. The first thing to do was to decide upon what scaling modes would be offered. This was, in part, actually influenced by Unity. Although I'm not a Unity developer (I've never actually coded a single thing in it), I was aware it had something called the Aspect Ratio Fitter, which is a UI component that is responsible for simply controlling the dimensions of whatever you attached it to, based on an aspect ratio and a selected aspect mode.

At the end of the day, this is all scaling is: the management of the dimensions of an object, based on an aspect mode and that of its parent. The difference is that for the Phaser Scale Manager it needed to apply its constraints to the game canvas, rather than an arbitrary UI component.

This got me thinking. Rather than building all of this functionality into the Scale Manager, why not create a new component that could manage the lions share of the work, but in such a generic way that it could be re-used both through-out Phaser and utilized directly in your own games as well. To that end, the Size component was created.

You can create a Size component directly by instantiating a Size object. The constructor arguments allow you to pass in a width, height, aspect mode and a parent. All of these are optional and can be set at any point via class methods. There are other limitations you can place on the Size too, including a minimum width and height, a maximum width and height, a 'snapping' value, which means the dimensions are snapped to the given grid size, and finally a parent element.

Let's create a Size object that is 400 x 200, with the default aspect mode and no parent:

This is what you'd expect, because the aspect ratio is the width divided by the height, and 400 / 200 is 2. So far, so normal. Where the Size component comes into play, however, is when you set one of the five available aspect modes. The modes are as follows:

This is the default aspect mode. It essentially means "don't do anything". It won't try to enforce the ratio between the width and height at all. If you adjust the dimensions of the Size component while in this mode, they will just change and the aspect ratio itself will be updated. Click the screenshots for interactive examples: 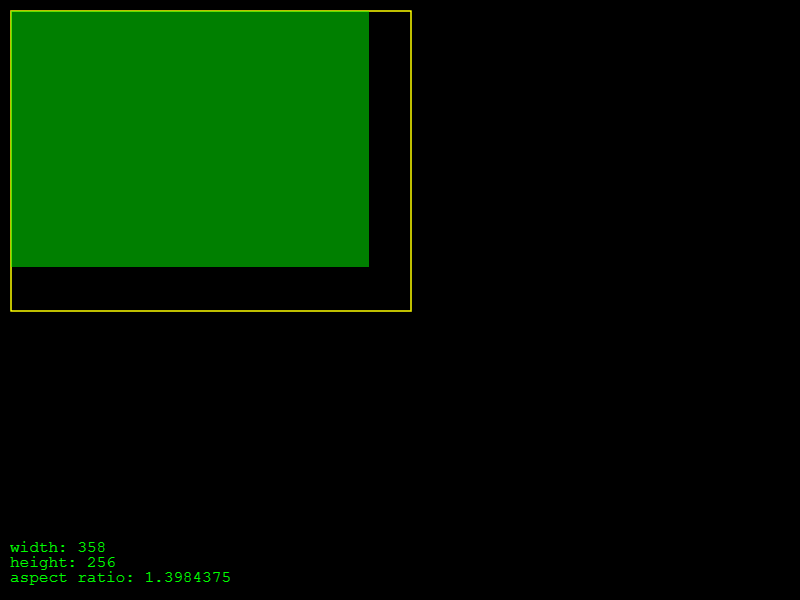 It will, however, still respect the Parent Size object, if set. It will also factor in the optional minimum and maximum dimensions and snapping values.

It's a useful default, but the other modes are where it starts to get interesting.

This aspect mode locks the aspect ratio between the width and the height. If you then adjust the dimensions of the Size component the width will be changed to whatever you requested, but the height will be calculated based on the ratio and the new width.

Notice how in the code above the aspect ratio has remained the same. The new width has been set to 700 as requested, but the height has changed to 525. This is because that's the new height based on the width and ratio, because in this mode, the width controls the height. 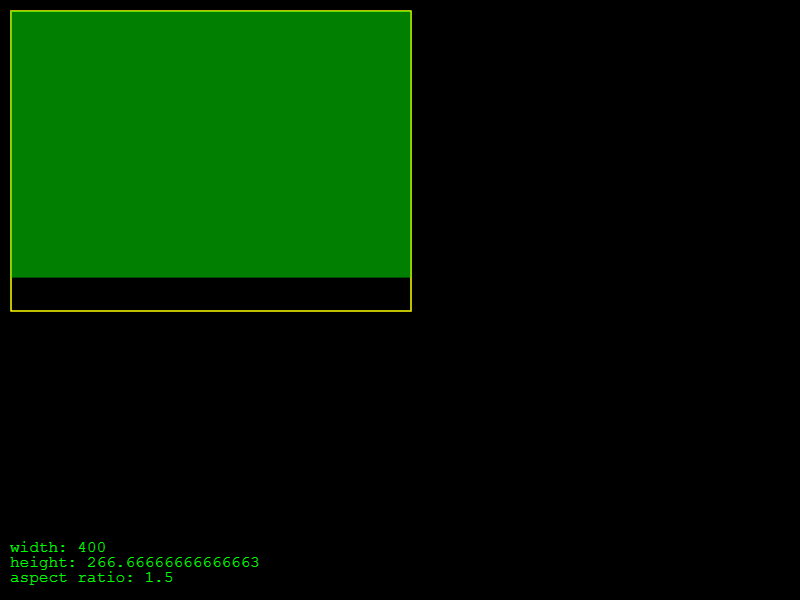 As you may expect, this is the opposite of the previous mode. The ratio is again locked and if you adjust the dimensions of the Size component the height will be changed to whatever you requested, but the width will be calculated based on the ratio and the new height.

Again, notice how in the code above the aspect ratio has remained the same. The new height has been set to 500 as requested, but the width has changed to 666. This is because that's the new width based on the height and ratio, because in this mode, the height controls the width. 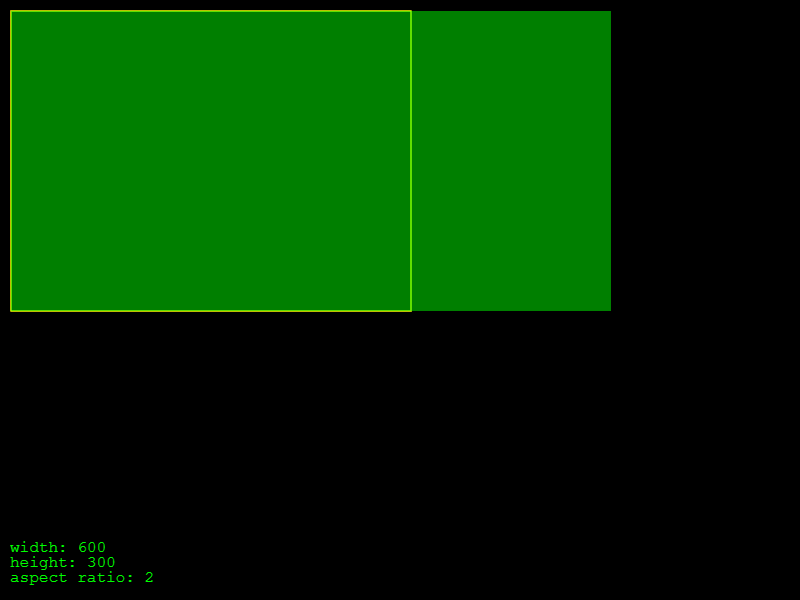 Nothing to do with broken New Year's resolutions, this aspect mode is where things start to get interesting. As before, the initial dimensions given to the Size component set the aspect ratio. When you then call setSize, or the fitTo method, or change its width or height properties, it recalculate the new dimensions based on its aspect ratio.

Let's assume our game has a resolution of 320 x 240. I know, that's tiny, but work with me here for a moment. Then the browser resizes to 550 x 400 in size. We want our game to still fit perfectly, with nothing obscured or cut off. The Size component performs its calculations and we get a new size of 533 x 400. The aspect ratio is still exactly the same, so our game hasn't been 'distorted' at all and will maintain its appearance. But it now fits as snuggly as it can into the new 550 x 400 size, while maintaining its ratio.

That is what the FIT mode does. It ensures your game fits the given space as tightly as possible without any change in ratio at all, and without cutting any of your game off. This means that, depending on the size you're trying to get it in, there may be some space inside the target that is not covered. 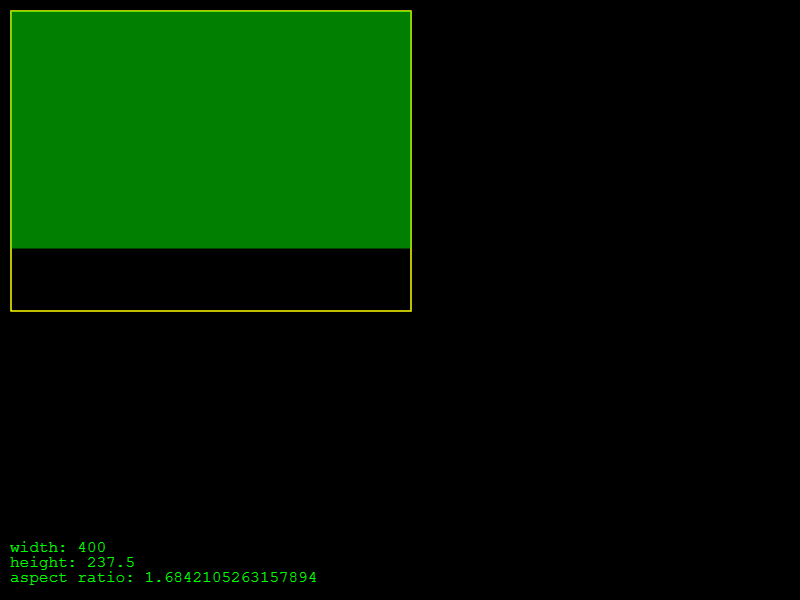 The final aspect mode is 'envelop'. Not to be confused with 'envelope', this mode performs in a similar way to FIT. The important difference is that the dimensions are changed so that they fully envelop the new width and height, while maintaining aspect ratio.

Again, our game has a tiny resolution of 320 x 240. The browser resizes to 550 x 400. But we want our game to fully envelop the available space, so we use the envelop aspect mode. The new size after the change is 550 x 412, meaning we've got an extra 12 vertical pixels that won't be visible within the browser window. However, there is literally no space not filled. Depending on your game this may be a preferable, visually, to any other mode. 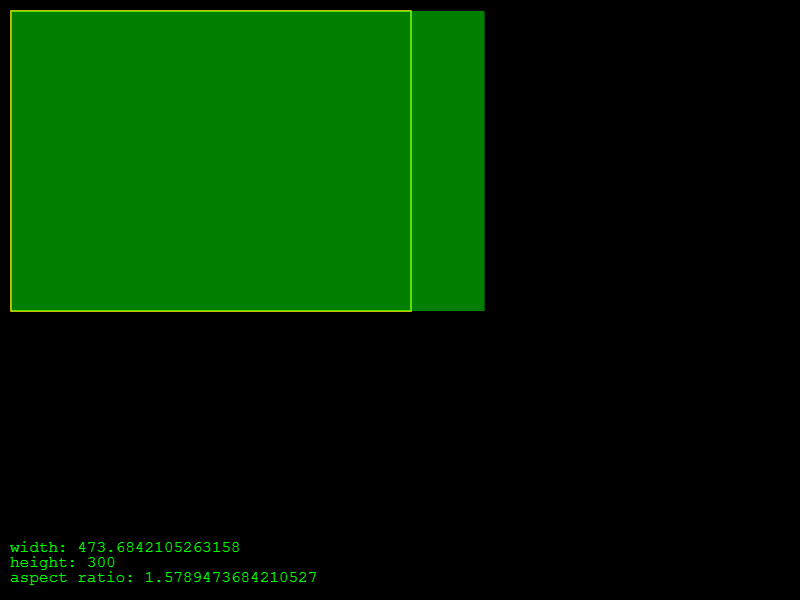 The Size component can do more than just constrain dimensions to a ratio. You can also give a component a parent. The parent can actually be any object, so long as it has publicly accessible width and height properties. So a Sprite, Rectangle, Physics Body, other Size object, etc. Most of the examples above use a Parent in them.

In the case of the Scale Manager the 'parent' is the browser window. When the browser resizes, or changes orientation, there are a bunch of internal Size components that are updated accordingly, maintaining their aspect ratios as they go. Hopefully, you can see the relationship between what the Size component offers, and what the Scale Manager does. Let's see how to apply it to a game.

All Scale Manager settings are applied via the Game Configuration. For example, here is a game set to use the FIT scale mode: 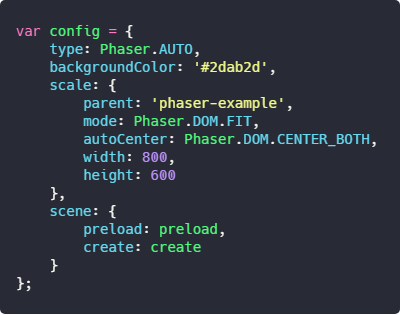 And here is what it looks like running while being resized:

You may have noticed the 'autoCenter' property in the config. This allows the game to remain centered in modes where there may be extra space available. You can also set minimum and maximum dimensions for your game. This means that even if the browser window drops below a certain size, the game won't get any smaller. The opposite is also true. Here's an example config:

Based on the config above the game canvas will never drop below 400x300 pixels in size, or expand beyond 1600x1200, all while still maintain its aspect ratio and fitting all available space.

Previously, Phaser 3 had a 'resize' method available on the Game instance itself. This has now moved to the Scale Manager. You can also set a 'RESIZE' scale mode and even define your size to be a percentage. The following config demonstrates: 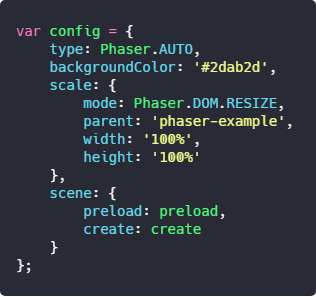 Here, the canvas is created at whatever size the parent element currently is. Then as it changes, it's resized to match it as you can see in the following animated gif:

The code is as follows:

The 'resize' function is sent the Size objects from the Scale Manager. Depending on what you're doing, depends on which one you need to use in your function. As this is a RESIZE example, using 'gameSize' makes most sense. Each of them are explained in detail in the Scale Manager docs.

I've also built plenty of options in to the Scale Manager. You can set a 'zoom factor' for your game. This was in V3, to a degree, in previous versions. For example, if your game was 160 x 144 in size (the size of the classic Gameboy), and you set the zoom level to 4, it would have a 'base size' of 640 x 576. You can then still apply a Scale mode and centering on the top of this, too! What's more, if you set a zoom level above 1 it will automatically enable pixel art mode for all textures too (as that's really the only time you'd ever need to use it).

Support for orientation is also in. You can listen for orientation events from the Scale Manager and adjust your game accordingly, perhaps displaying a 'please rotate' screen. Both the browser orientation API (which only works on mobile) and a desktop calculated version are included. Orientation Locking support is also included, although again this is very browser specific.

The final main feature left to add is the Full Screen API, which I'm confident will be completed this week. I need to conduct further cross browser tests, especially on a wider variety of mobile devices, but so far it's looking great and resizing as you'd expect.

You can test it out for yourself by grabbing the V136 build from the examples repo and looking at the source code of the new Scale Manager examples. Please note that I'm actively working on it, so the examples will be changing and being added to this week.

All in all, I'm very happy with how it's working and the new structure. The Size component itself is extremely handy just for general game-use! and the fact the Scale Manager uses it for the bulk of its work is great. I've also been able to remove loads of excess code from the Input Manager and Renderers as a result of this work. I'm very hopeful we'll have a full 3.16 release before the end of January.